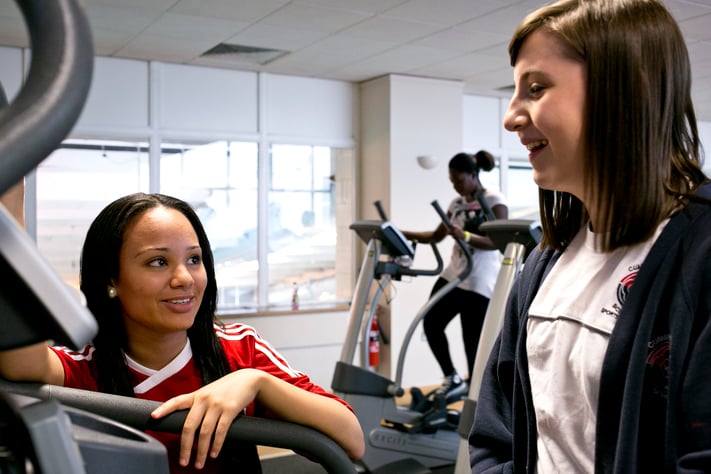 Two million fewer women than men get regular exercise and 13 million women and girls want to play sport, but there’s something stopping them. In a recent survey, it became clear that fear of judgment was to blame, or ‘gymtimidation’ as it’s recently become known.

The fear of being judged on their appearance and their ability in the gym are up there with the biggest reasons as to why less ladies are heading to leisure centres and gyms and getting involved.

Getting red faced and sweaty is something to be proud of. It’s not a sign you’re overweight or unfit (in fact it’s often the opposite!), it’s a sign that you’re pushing your body to its limits and ultimately that you’re going to be reaping in the rewards. The sweats going to do you good. Not only will it cool you down, it’ll help flush out the toxins in your body, open up your pores leaving you with clearer skin and it’s a natural pain reliever! Proudly rock your sweat patches and pink cheeks, they’re not something to be ashamed of!

If you’re reading this knowing you’re someone who would avoid the gym because you think you’ll turn up and be surrounded by Herculean men and Greek goddesses, with airbrushed bodies, judging you because you might not be doing something like they’d do it or you’re not lifting as heavier weights as they are, then think again. Everyone had had to start somewhere. No one was born to crack out 100 sit ups followed by a 10 mile run on the treadmill.

People are far too invested in themselves and what they’re doing to worry about you. We’re harder on ourselves than others are- pop in some headphones, put on a killer playlist, focus on your body and your goals rather than what’s going on around you. Once you’re in the zone, there’ll be no stopping you.

With 36% of women wanting to go to the gym for the sole purpose of losing weight, it comes as a surprise that 15% of those women don’t think they’re fit enough to go to the gym.. But surely that’s partly why you signed up for a membership in the first place? You have to take that first step outside of your comfort zone in order to gain your confidence and reach your fitness goals. Going to the gym is only going to get easier the more you go.

If you’re thinking of getting yourself a membership or even just trying out a new class at your current gym, there’s a few things you can do to give you that extra boost:

When you’ve got your favourite songs set up on a playlist and you’re ready to take on the treadmill, just remember that everyone was a beginner once, the first days the hardest and that you’re taking the first step in becoming your best self. You can do this!

Simply enter your email to be the first to read all our latest health & fitness tips!